How to Beat Journey of the Prairie King

You'll get the Prairie King Arcade System in the mail the day after you beat Journey of the Prairie King. This will make a deathless run for the hidden achievement (Fector's Challenge) much easier.

To make the challenge easier, set up the Arcade System in your house and play it the first thing in the day. Patch 1.5 has made this much easier as your progress in the arcade game saves between each level -- this means that you can restart the day (instead of saving) if you die. The pattern you'll want to follow is:

Again, at any point during the game, restart the day (as in, return the main menu or restart the game without saving) and try again.

On the first map (Prairie), focus on the Ammo Box upgrade (15) and the gun upgrade (10). If you make it to the Outlaw boss without both upgrades, it may be easier to reset the run instead.

On the second map (Forest), buy a second Ammo Box (30) at the first vendor. If you don't have enough gold, you can buy the gun upgrade (20) instead but you risk not having the second ammo upgrade.

On the third map (Graveyard), buy whichever upgrade you didn't get during the forest map -- either the Ammo Box (30) or the Gun (20). At the second vendor, pick up boots.

The overall upgrade path is: Ammo -> Gun -> Ammo -> Gun -> Boots (this allows you to skip purchasing from one of the vendors). The boots aren't necessary but it's nice to have. When I completed Fector's Challenge, I cheesed the run by saving after each level and it allowed me to beat the boss after a couple of attempts with one Ammo upgrade, two Gun upgrades, and one Boots upgrade -- definitely not recommended for a truly clean run.

Unfortunately these levels rely largely on luck. Try to save a Screen Nuke for at least one swarm of Imps during 3-3 and take advantage of the downtime to kill as many mummies as you can (hopefully picking up items along the way). Spam items liberally but try to save a Heavy Machine Gun or Wagon Wheel for the final boss.

The outlaw bosses are mostly trivial with a little patience. While shooting the entire time, hide behind cover and peak out to get a few shots in. Once the Outlaw fully leaves cover, shoot at them using diagonal attacks then return behind cover as they do. Repeat this process until they are defeated. 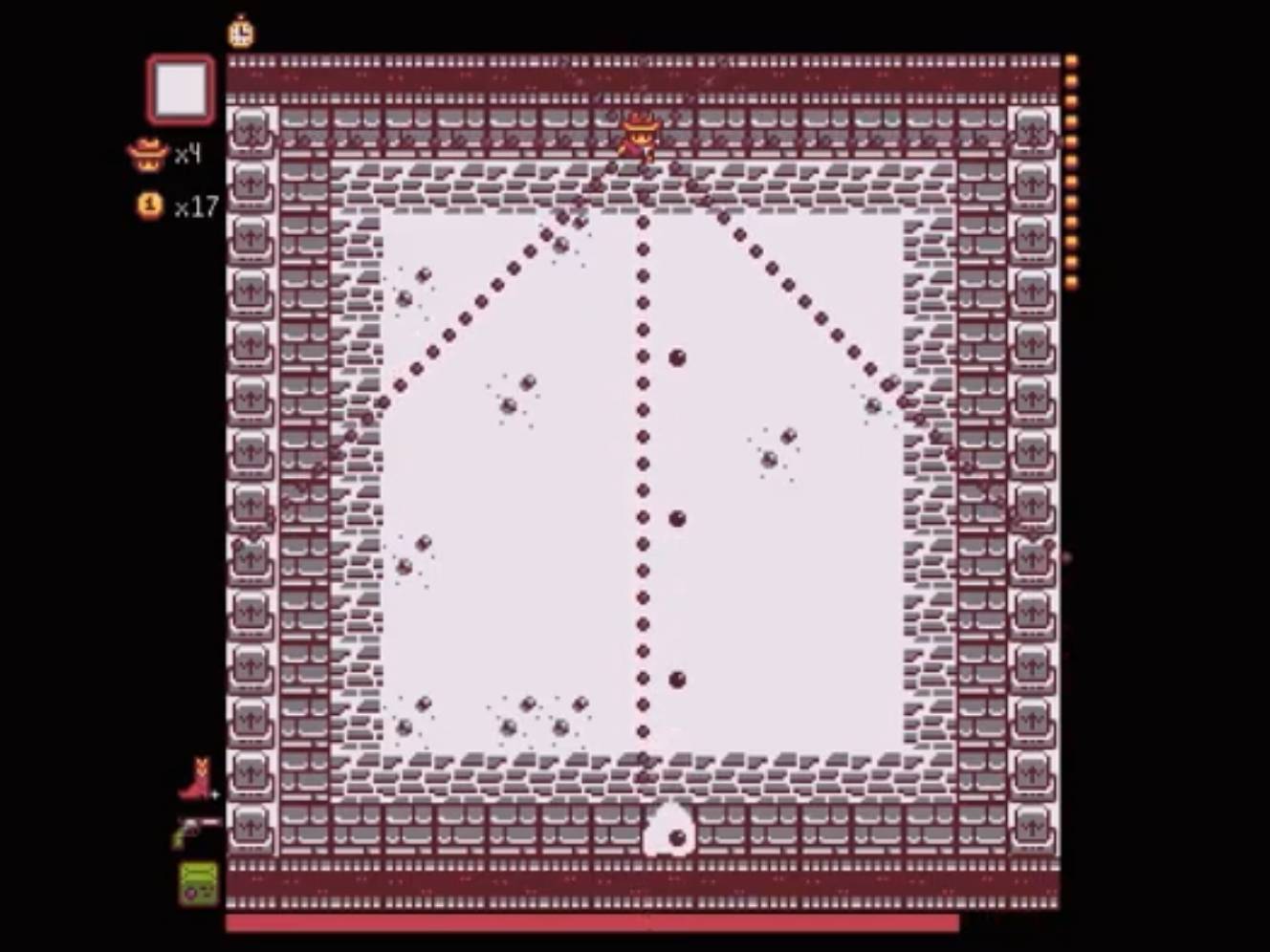 If you step slightly to the left (about half of a normal square), you can still hit Fector while dodging his attacks -- his shots will miss your left should by a few pixels but your shots will still hit him. With a Machine Gun (or similar item bonus), you'll be able to do about 3/4 of his health before he starts summoning monsters.

If you don't have a Machine Gun, you can still take advantage of the trick but you'll only get 1/3 of his health done before entering a different phase. The best thing you can do during a more fair fight is to focus on dodging his attacks than it is to hit him, he'll reset after each phase giving you a window to hit him in the center of the map. The pattern is damage during reset, dodge (and only dodge) when he attacks.

True Achievements has an in-depth guide on completing Fector's Challenge if you'd like to read it. Reddit also has some extra tips.